The Doctor takes Romana and K9 to return some library books in 1930s London. There they become embroiled in the evil Zodaal’s attempt to destroy the world.

The English Way of Death is Gareth Roberts’ follow-up to his 1995 Fourth Doctor novel The Romance of Crime is another tour de force of wit and ingenuity. His mastery of these characters voices and interplay is a pure joy to read, and both of these novels have remained bright in my memory long after most of their fellow Missing Adventures have faded. We’re lucky to have a handsome new edition re-published by BBC Books just as Big Finish have adapted the story as a full cast audio play. 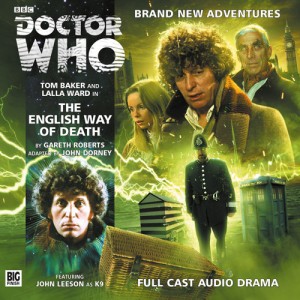 The story features two parties of interlopers who are alien to 1930s London. They are both masquerading as natives in an era that is represented by the characters of Colonel Radlett and Felicia Chater; who serve as mirror to the Circle and Zodaal, by also trying to present themselves a certain way to fit into this society.

There’s a nice interview with Gareth Roberts in TARDIS Eruditorum Volume 5 in which talks about why he loves the Graham Williams era so much. Eruditorum writer Phil Sandifer agrees with Roberts’ main point that it’s just so much fun. It’s great to have such talented writers recreate the wit and verve of that time in novels and audios , unhampered by the poorer production values Williams suffered due to rampant inflation.

One of the irresistible things about this story is that it mixes the gothic horror of the Hinchcliffe-era with the Douglas Adams wit of Doctor Who‘s seventeenth season. Zombies are one of the few horror staples not mined by the series in the early Tom Baker years, so they are great monster to use here, with the added science-fiction explanation of their brain-eatng proclivities. Interestingly, Jonathan Morris also uses zombies in his Fourth Doctor/Second Romana/K9 novel, The Festival of Death. Morris pulls script-editing duties on John Dorney’s script for the audio adaptation. 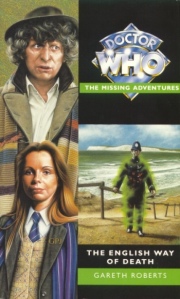 Big Finish’s adaptation is great fun, and it’s wonderful to hear Tom Baker and Lalla Ward reprise their roles opposite each other again, alongside John Leeson as K9. After a few seasons of (for the most part) two-part twenty-five minute episodes for the Fourth Doctor, it’s great to hear his incarnation in this four-part adventure. What cuts have been necessary for time make sense, collapsing Orlick and the un-named Police sergeant into one character, so that the iconic image from the cover of the original Virgin Missing Adventure is present and correct. Radlett becoming besotted with Romana is largely removed, while the parallel sub-plot of Mrs Chater and Percy is pared back but in tact. Demon Headmaster (and The Beast Below) actor Terrence Hardiman is perfect casting as the villainous Zodaal, giving the possessed Mr Stackhouse a suitably cadaverous sound. The delivery of all the lines enhances the wonderful P.G. Wodehouse feel of the material, which Tom Baker’s incarnation seems particularly suited to.

Order The English Way of Death novel from Amazon:

The English Way of Death (Doctor Who)