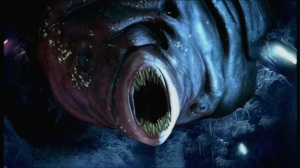 The Doctor, Rose and Adam arrive on Station 5, the hub of all news reporting for the human race. There they discover that someone has been manipulating human history.

I first watched this story on broadcast, the day after I followed Rose’s example and left my job in retail. I was to embark on an exciting new career in banking. The economy was buoyant and Gordon Brown was regularly saying that boom and bust had ended. What could be a more secure and reputable position than working in a bank?

I always thought about this story when our old Regional Managing Director in the bank used to tell us his firm belief at every meeting that, within our lifetimes, it would be possible to download information directly into our brains. The idea on display here, interfacing with an ethereal beam of light, certainly looks preferable to a metal spike in the back of the head favoured by The Matrix or the recent short-lived Tomorrow People reboot. Although possibly even more agreeable than risking a draught on the brain is the current thinking that tiny computers in the blood will exchange data with the Cloud.

The only completely studio-bound story of the 2005 series, The Long Game is based on an idea Russell T. Davies originally submitted to script editor Andrew Cartmell during the McCoy era. It does feel the most like twentieth century Doctor Who of any of this series.

“The Fourth Great and Bountiful Human Empire. And there it is, planet Earth, at its height. Covered with MegaCities, five moons, population ninety-six billion. The hub of a galactic domain stretching across a million planets, a million species, with mankind right in the middle.”

Great dialogue, but whereas Tom Baker or most of the other Doctors would have really raised the hairs on the back of the neck, it just sounds so flat and ordinary to me in Eccleston’s voice. I am beginning to wonder if it’s just because I’m a Northerner myself. But then Professor Brian Cox is a Manc (albeit not with the exaggerated accent of the Ninth Doctor), and he can inject a sense of wonder into things with his delivery.

Simon Pegg as the Editor is the highlight here. This is after the releases of the brilliant Shaun of the Dead, but before he cracked Hollywood with appearances in the Star Trek and Mission: Impossible franchises. Strange to think now that he also narrated the first series of Doctor Who Confidential. The Editor talks about promotion a lot, and unsurprisingly Pegg himself has been linked with the top job on the last couple of occasions we’ve needed a new Doctor. He’d be a superb choice to play the part, a piece of dream casting nearly on a par with Peter Capaldi. When Smith announced his departure, Pegg denied he was in the running, claiming not to have watched the series since appearing in this episode. This piqued my interest and made me think he might actually be lying about being the Twelfth doctor, because he was regularly tweeting about episodes he’d clearly watched five years later.

This is the first example of a ‘golden age’ not quite living up to the name in Davies’ Doctor Who. The premiership of Harriet Jones is another one that ended badly; and the epponymous Utopia turns into something dreadful (by which I mean humans being converted into Toclafane, not that the storyline ultimately became Last of the Time Lords).

“Create a climate of fear and it’s easy to keep the borders closed.”

The themes of media corruption and the erosion of freedom in the name of preserving freedom are prevalent in a lot of fiction; but it’s prescient of RTD to have a consortium of banks behind the derailing of the human race, a good three years before this happened in reality.

A scene that only stands out now with a few years hindsight is the Editor’s interrogation of the Doctor and Rose. The Doctor will not disclose any information about himself, and immediately denies being a Time Lord when Adam’s knowledge is uploaded. This is in stark contrast to his two immediate successors, who can’t wait to blurt out their species and planet of origin. This more circumspect way of behaving is better for the Doctor’s idiom. I prefer the character as a mysterious wanderer who turns up, saves the day and disappears again. Now that we’ve seen Night of the Doctor, it makes sense that he’s be cagey too, after the reaction of the young lady he tries to rescue.

The subplot concerns Adam, the boy who joined the TARDIS team in the previous story, Dalek. He doesn’t reach Adric-levels of annoying, and unlike the Alzarian we’re invited not to think much of him. His actions are amoral and reckless, but even before he tries to destroy causality that same unattractive, slightly bullying mockery that Mickey has endured comes to the fore. When the trio arrive in the future, he finds it all a bit overwhelming, and difficult to deal with. But then so does Jo In Colony in Space. She begs the Doctor to let her out of the ship, then to return them to Earth once they set foot on Uxarieus. I understand the Ninth Doctor is supposed to have rough edges due to the Time War, but it’s somewhat at odds with the cloying soppiness between him and Rose.

Order Doctor Who: Series One from Amazon: